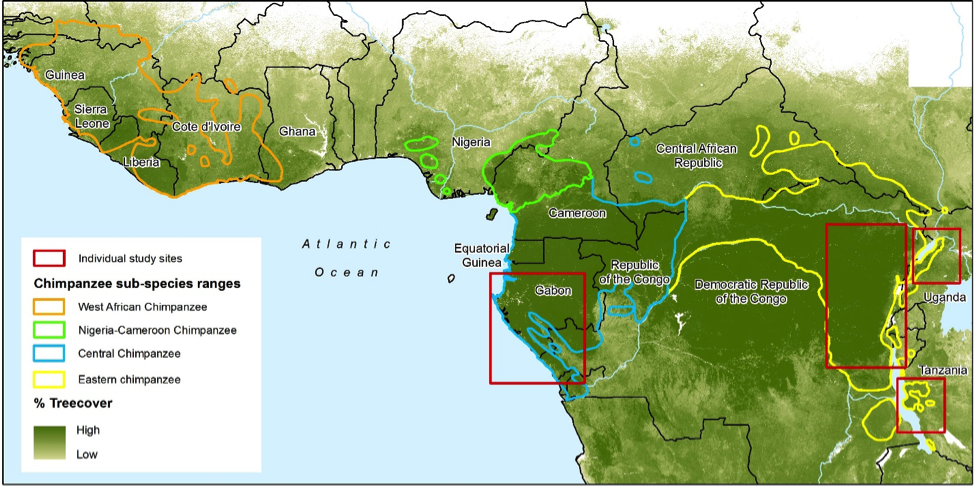 The University of Maryland has partnered with the Jane Goodall Institute (JGI) and NASA to develop a monitoring system to help protect remaining chimpanzee habitat.  The chimpanzee (Pan troglodytes), listed as Endangered on the IUCN Red List since 1996, is threatened by habitat loss from resource extraction and land conversion, as well as hunting, disease and the illegal pet trade.  It has been estimated that more than 70% of chimpanzee's tropical forest habitats in Africa are now threatened by infrastructure development and human-induced land use change.  It has been estimated that their cumulative population has declined by more than 66 % over the past 40 years.

Understanding the relative condition, or "health," of chimpanzee habitat at high spatial resolution across the chimpanzee range will be key for planning effective conservation strategies for the species.This project focuses on the development of a decision support system (DSS) that uses a combination of modeling, data derived from remote sensing, and crowd-sourced field data to forecast and systematically monitor Eastern and Central chimpanzee habitat health.The DSS will help the Jane Goodall Institute target and prioritize required conservation actions to protect chimpanzees, providing near real-time access to data describing current threats and status of chimpanzee populations throughout their range.