A cobra in the forest? Quantifying the impact of perverse incentives from Indonesia's deforestation moratorium, 2011 to 2016 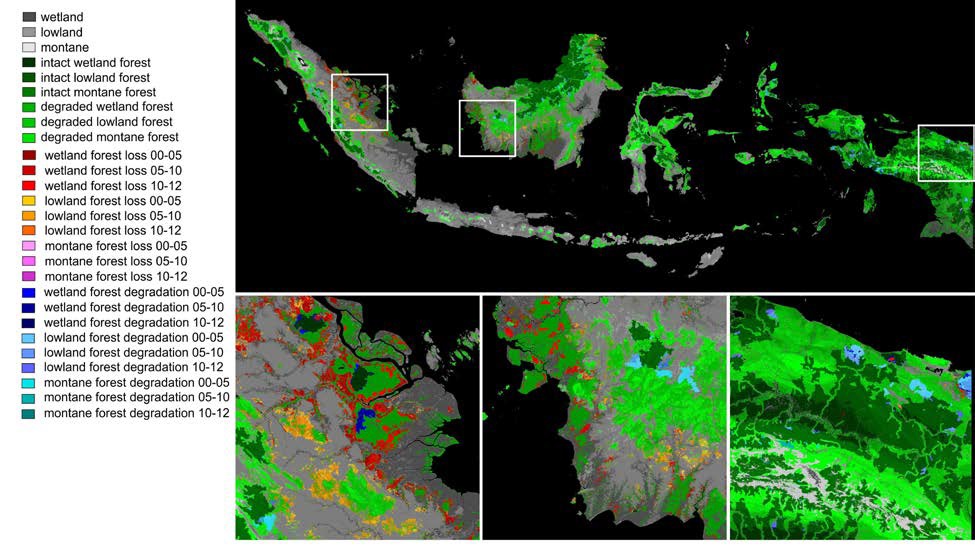 While initially heralded as a win for conservation and sustainable forest management, the Indonesian government’s moratorium halting the issuance of new licenses for logging, palm oil, and wood-fiber plantations in primary natural forests and peatlands has not substantially slowed deforestation. In fact, the highest area of primary forest clearing since 2000 occurred in 2012, the first full year of the moratorium’s implementation. Compared to Brazil, whose forest policy and associated enforcement has reduced deforestation by over 70%, Indonesia has made little or no progress in slowing primary forest loss. Analysis of the text of the moratorium suggested that it would have little impact on the expansion of palm oil due to allowances made for pre-existing licenses even if agreed to only ‘in principle.’  Forty million new permits, covering a ‘staggering’ 3 million hectares were granted in the lead-up to the official moratorium period beginning in May, 2011. The acceleration of forest conversion in Indonesia around the time of the moratorium’s start suggests the possibility that the moratorium resulted in a Cobra Effect, whereby the policy created perverse incentives for local actors and industries to acquire permits prior to the freeze and intensify forest land conversion in the aftermath.

Indonesia’s main island groups and landforms within them exhibit different rates of forest loss and illustrate various stages of the forest land use transition. Initial forest clearing in a given landscape is often tied to political considerations. Indonesia’s decentralization policy has led to a proliferation of new provinces and districts with increasing deforestation correspondent to the creation of new political jurisdictions. As the primary forest resource is exhausted, conversion of forest lands with official protection status has increased. This narrative is one of continued appropriation of rainforest for commodity production and a corresponding lack of evidence of the effectiveness of policy initiatives aimed to slow deforestation. Indonesia provides an illustrative case to examine the mechanisms driving perverse incentives as one dimension of the politics of land use under decentralized governance, a process taking place in many other countries within Southeast Asia such as Cambodia and Burma (Myanmar). The ability for forest ecosystems in Southeast Asia to absorb intensified land clearing driven by perverse incentives resulting from state conservation policies, and the subsequent impacts on human well-being impacts, remains unknown.

The clearing and degradation of forests and peatlands is a leading cause of anthropogenic carbon emissions, second only to the burning of fossil fuels. Globally, these land cover changes account for an estimated 15% of all human-caused carbon emissions. Land use change generally, and tropical forest loss specifically, also contributes significantly to the declines in animal and plant biodiversity that are characterizing the Anthropocene. Given that Indonesia has one of the highest deforestation rates in the world, understanding what drives the negative unintended consequences of the moratorium merits attention. Commodities, including palm oil, paper and timber products, are the primary drivers of forest conversion, yet the
relative contribution of each sector to on-going deforestation remains unknown. Moreover, small-scale producers also face intense pressure to diversify from agricultural activities and increase income from forest resources, including seeking employment on industrial plantations, both of which could exacerbate deforestation. Against this backdrop of the continued appropriation of Indonesia’s primary forests for agroindustrial  land uses, this project aims to examine the impact of the moratorium on rates of primary forest clearing. We will quantify administrative units that exhibit higher than expected forest conversion post-moratorium, and perform surveys to confirm, or not, the presence of a cobra effect and consequent impacts on socioeconomic well-being. The proposed study will be the first to geographically quantify areas of accelerated primary forest loss, the political mechanisms across jurisdictions that enabled the increased clearing, and the impacts on and perceptions of local populations.

The proposed study aims to enhance our capacity to quantitatively measure land use change dynamics and identify how human responses to conservation policy might alter human and
natural environments. The proposed study takes a mixed methods, theoretically-informed approach, integrating data derived from remotely sensed imagery, in-depth interviews, and household surveys. We will employ Earth observation-based land cover monitoring, content and socio-economic analysis, and spatially explicit modeling to: 1) document land use transitions using satellite observations to understand the trajectory of LCLUC patterns at the subnational level, 2) identify the potential power dynamics and the causal political factors underlying observed LCLUC dynamics, including those contributing to unintended consequences of forest conservation policies, and how these processes vary at the sub-national level, 3) assess how human-wellbeing might be impacted by deforestation depending on different political land clearance regimes, and 4) identify feedbacks between social and natural systems caused by local responses to deforestation in different political contexts and understand how these dynamic interactions shape future deforestation pathways.

Using existing remote sensing technologies and datasets, we will empirically test where accelerated deforestation occurred, at the district-level, after Indonesia’s moratorium. The field research and socio-economic component will be used to document a more complete narrative on drivers, actors, governance, outcomes and other aspects of district-scale forest conversion. Taken together, the study will enable a better understanding of the political mechanisms enabling perverse incentives to exacerbate deforestation and examine resultant effects on well-being for societies living in or near deforested areas.

In order to address this goal and test our hypotheses, we will undertake the following three objectives:
Objective 1 corresponds to the Remote Sensing component of this study. The proposed research project aspires to relate spatio-temporal trends to pre- and post-moratorium deforestation occurring at the district level. For this, we will develop a typology of land use change associated with the rate of deforestation and type of land use conversion for all of Indonesia. Controlling for factors relating to of primary forest area, landform, forest land use status, and area under permit, we posit three general outcomes: 1) rates of deforestation were unaffected, 2) rates of deforestation increased, whereby deforestation rates spiked immediately after the moratorium’s enactment, and 3) rates of deforestation immediately decreased. The first outcome would indicate a ‘business as usual’ scenario with limited to no material impact of the moratorium decree on forest governance. The second outcome depicts a perverse incentive scenario where the granting of land use permits accelerated in anticipation of a ban on future permits. The third outcome captures a scenario where the facts on the ground match the political objective of slowing deforestation.

Specifically we will address the following research questions:
1.1 Which of the three proposed scenarios occur in each district in Indonesia?
1.2 What are the spatial patterns of each scenario, and how are these outcomes related to land
cover type (e.g., forest, peat land) or forest governance structure (e.g., different provinces)?

Objective 2 corresponds to the Social and Economic Sciences component of this project to identify the political interactions influencing land cover/land use change. This research objective will broaden our understanding of how key actors in land use governance, including government agencies and private sector companies, use their influence and power to shape deforestation rates after the moratorium took effect. We will examine how the decentralization of forest rights have supported or undermined the legislative and regulatory frameworks for forest conservation at the subnational and local scales. We will also analyze what key factors enable actors to attain permission to clear forested land for commercial or agricultural purposes, and how this varies across districts. Finally, we will identify relationships between ecological conditions, economic development, and the district-level political climate as expressed in differential rates of deforestation before and after the moratorium.

Specifically we will address the following research questions:
2.1) To what extent can accelerated forest clearing be attributed to perverse incentives driven by
Indonesia’s Moratorium?
2.2) What political mechanisms enabled the moratorium policy to produce these unintended
effects?

Objective 3 corresponds to the Social and Economic Sciences component of this solicitation using scalable case studies to document drivers of specific land use trajectories and resultant effects on human well-being. For this objective, we seek to improve our understanding of the connection between human-wellbeing and vulnerability, forest degradation trajectories, and land use governance regimes. Specifically, we will assess if communities in areas where accelerated clearing occurred (Scenario 1) experienced more negative economic, social, or psychological effects than those living in areas where clearing rates did not change post-moratorium (Scenario 2), or where clearing rates decreased (Scenario 3). The combination of intrinsic ecological variability and uneven forest degradation is likely to result in complex spatial landscapes and shifting household livelihood portfolios that impact future trajectories of LCLUC. The proposed research will improve our understanding how the political process under which different spatial, temporal and intensity patterns of deforestation occur can result in uneven impacts on human well-being and vulnerability.

Specifically we will address the following research questions:

3.1) How do socio-economic well-being and human vulnerability vary across areas with different
post-moratorium outcomes?
3.2) How have human livelihoods changed in response to the three different land clearance
scenarios identified in Objective 1, and how are these shifts likely to contribute to future changes
in land use trajectories?