Near doubling of Brazil’s cropland area since 2000

This file contain unsigned 8-bit values and has a spatial resolution of 1 arc-second per pixel, or approximately 30 meters per pixel at the equator. For this study, cropland is defined as the land area under intensively managed, agro-industrial row crops consisting of commodity crops such as soybean, sugar cane, cotton, corn, rice and wheat. Class codes are as follows:
0 -- Outside of Brazil
1 -- Cropland extent, year 2000
2 -- Cropland expansion from 2001 to 2014
3 -- No cropland
4 -- Water 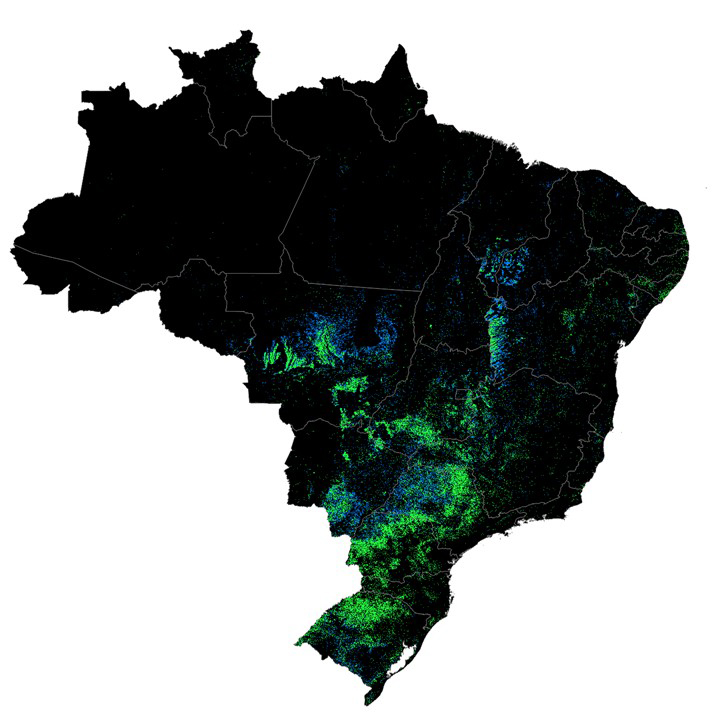 This link contains links to the web interface of each of the 5000 sample pixels used to estimate cropland extent and expansion areas Composites on top are annual cloud-free Landsat composites in 5-4-3 band combination from 1999 to 2014. Bottom composites are annual cloud-free Landsat composites where yearly maximum NDVI is loaded in the red band, and yearly minimum NDVI is loaded in the green and blue bands from 2000 to 2014. Time series graph shows MODIS 16-day NDVI time series. The link on the top right downloads a .kml file which allows the user to visualize the sampled pixel on Google Earth.

Area estimates and associated uncertainties are provided for each state and biome having over 10 sample pixels in the "cropland expansion" strata as well as for MATOPIBA. Estimates are disaggregated by year, by previous land cover type, and by strata. All area estimates and standard errors are in hectares.